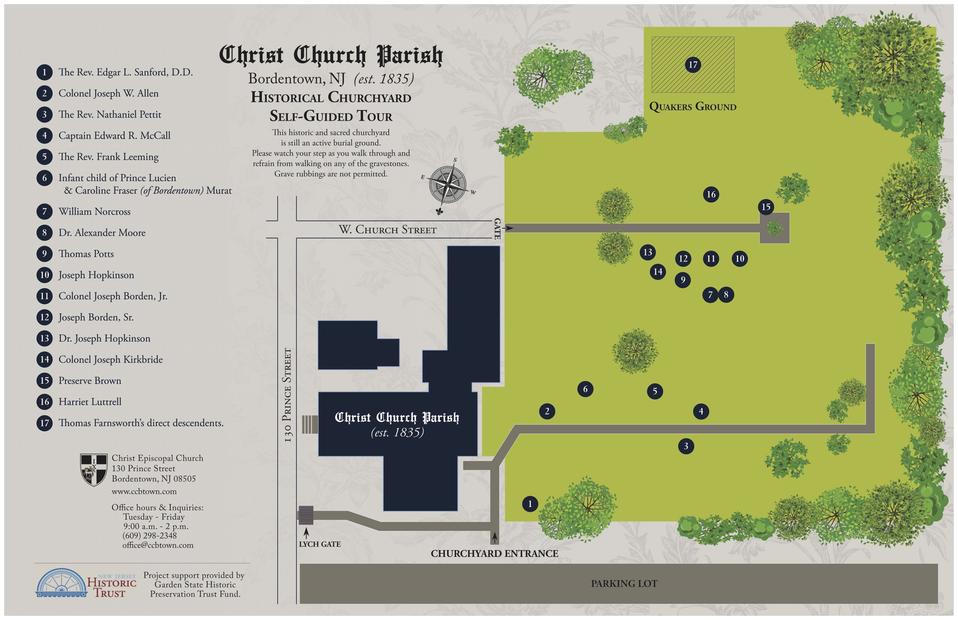 Historic Christ Church Parish Churchyard contains the graves of many of the City's oldest families, as well as prominent Bordentonians who served our country in armed conflicts including the Revolutionary War, War of 1812, and the Civil War.  We hope your time here is edifying, and please pray for those who rest in this place.

The Churchyard includes the Parish burial ground planned in 1844, the burial grounds of the Borden and Hopkinson families, and the early Quaker, Baptist, and Methodist grounds, all purchased by and deeded to Christ Church over the years.  Among prominent citizens and church members buried here are: 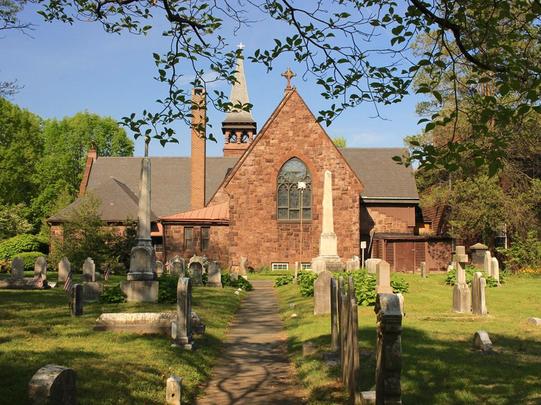 2.) Colonel Joseph W. Allen (1811 - 1862) was a Warden and Vestryman of Christ Church.  The monument was erected by his men in the Colonel’s memory.  The inscriptions have faded so they are written below for your convenience:

4.) Captain Edward R. McCall (1790 - 1853) was a member of the U.S. Navy during the War of 1812.  In 1813 the USS Enterprise engaged the HMS Boxer off the coast of Portland, Maine.  Both the U.S. and British captains were mortally wounded during the engagement.  The then Lieutenant McCall took command of the USS Enterprise and captured the HMS Boxer.  For additional information, visit: www.maritime-scotland.com/boxerletter.html.

6.) The infant child of Prince Lucien Murat and Caroline Fraser (of Bordentown) is buried here.  Prince Lucien was the nephew of Joseph Bonaparte, who was the exiled King of Spain and brother of Napoleon.  The unmarked stone nearby is said to be that of the infant’s nurse.

10.) Joseph Hopkinson (1770 – 1842) was the son of Francis Hopkinson, a signer of the Declaration of Independence, and Ann Borden, daughter of the founder of Bordentown, who are both buried in Christ Churchyard in Philadelphia.  Joseph was a famous trial and constitutional lawyer who served as legal counsel to Joseph Bonaparte and Captain Charles Stewart.  He was a member of the U.S. House of Representatives, a Federal district judge, a New Jersey state legislator and a member of Pennsylvania’s 1837 Constitutional Convention.   Joseph wrote the words to America’s first national anthem, “Hail Columbia”.  This song is now used for the Vice President of the United States and former Presidents, except when they are accompanied by the President of the United States.

12.) Joseph Borden, Sr. (1687 - 1765) was the enterprising man for whom our town is named.  He was the father of Colonel Joseph Borden and grandfather of Captain Joseph Borden.  He arrived in 1717 and founded a transportation system to carry people and freight between New York City and Philadelphia.  This utilized Bordentown’s natural location as the point on the Delaware River that provided the shortest overland route to South Amboy, from which cargo and people could be ferried to New York City.

13.) Dr. Joseph Hopkinson (1816 - 1865) was the son of Joseph and grandson of Francis.  He was the surgeon in charge of Mower Hospital in Philadelphia, which was a United States Volunteers hospital which housed 3,100 beds.
Other members of the Borden and Hopkinson families are buried in this area.

14.) Colonel Joseph Kirkbride (1731-1803) was a Revolutionary Patriot and good friend of Thomas Paine.  His stone reads as follows:

"This shall commemorate the virtues of COL. JOSEPH KIRKBRIDE, for he was a patriot who zealously served his country in the Armies and Councils during the Revolution of 1776.  He was a citizen who faithfully performed the duties of social life and he was an honest man who in his thoughts, words and actions, Illustrated the noblest work of God.  Died Oct. 26th, 1803, aged 72 years.”

17.) Thomas Farnsworth’s direct descendents are interred in the Quaker area.

For more information on those interred in the parish churchyard, please call the church office (609) 298-2348 or email: office@ccbtown.com